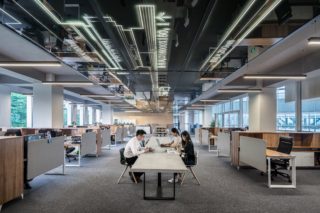 This word itself has enough potential for a blog post. In my mind I keep seeing an image of the cross between a  ‘burro’ the Spanish word for a donkey, and ‘bur!’ the Hebrew word for ignoramus, or fool. Together, they create a very ‘bur’ like ‘burro’. Plus, the little dots over the u has had me twisting my tongue and lips into all sorts of kissy shapes all afternoon in an effort to pronounce it in authentic German.

However, all that very fascinating procrastination is just warm-up for what this word actually means. Its literal meaning is Office Landscape, which can also be taken to mean Office Design. It’s also a concept in office design dreamed up by two Post World War II German brothers in the town of Quickborn, Germany.

Evidently, they were tired of hierarchy. I’m sure Eberhard and Wolfgang Schnelle (the aforementioned brothers) were very fine men and were not at all part of the “I was following orders” generation. Still, they had to live with the fact that they, or their neighbors, had just accomplished the greatest systematic genocide in the history of human civilization. At the behest of one crazy man.

Their concept of office design was much less rigid than the Tayloristic model of efficiency and repetition. Or, in more colorful language: They wanted to scramble the excel sheet looking offices of the pre-World War II world. In fact, the diagrams of their offices look a little like happily contrived visions of scribbled chaos. The desks would be arranged in random, circular patterns, plants would serve as organic partitions, and carpets would be used to assuage the sound problem. If it could translate into real life, employees could live happy, orderly, chaotic lives.

It was a good idea. So good, in fact, that we still talk about it today. Unfortunately, it didn’t quite work. While people looked the interactive idea, furniture designers ‘upgrade’ by adding partitions and walls to the desks to create a semi-office. (Help, it’s the cubicle!). They had the support of corporations who were pressed for money and space. The offices of the 60s and 70s are sometimes called Shareholder Offices because they were designed for efficiency and profit (to please the shareholder) and not for the employee.

The office landscape of the second half of the 20th century devolved from the open, egalitarian design of Bürolandschaft, back to the model of Taylorism, now assisted by the notorious cubicle grids.

It’s a very sad story. So sad in fact that I’ll have to end it here. The hope is that you now know what Burolandscaft is, your life is much enriched, and you’ll design your office with as much compassion for your employees as Mr. and Mr. Schnelle.