Since their appearance in 1968, cubicles have made an indelible impression on American corporate culture. They appear over and over in pop culture as the prime character in office humor, and the prime suspect of office soullessness. Though millions of people spend their time in cubicles every day, and do or do not share the Dilbert experience, and millions more have never stepped foot in a cubicle – we all accept their image as it is depicted in The Office, Office Space and in hundreds of cartoons and animations like this one: 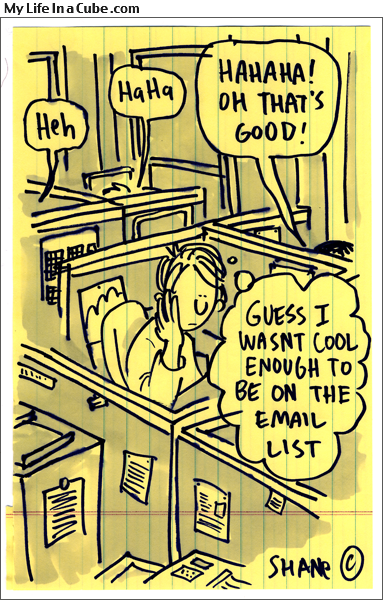 Despite their negative symbolism today, cubicles actually began as a revolution; a plan to overthrow the bureaucratic and authoritarian offices of the time, and usher in a new era of equality, respect and collaboration. The first cubicles, called Action Offices, were designed by Robert Propst and manufactured by Aeron Miller. Their purpose was to tear down the walls between the levels of office hierarchy, and give office workers more space and more autonomy.

The noble vision behind the cubicles didn’t happen in a vacuum. The world was moving away from the squares of bureaucracy and towards the “free flow of ideas.” For a time, cubicles were a symbol of a new type of office, where ideas could flow freely, with no walls to stop them.  Silicon Valley was a big proponent of this new vision and Intel was the chief example of the creative and egalitarian workplace. Their office building had no dress code, no reserved parking spots, and no offices. The CEO worked in one of the cubicles alongside the interns and the secretaries and every other worker at Intel.

So what happened? It could be that the economics of it took over. Companies that didn’t share the egalitarian vision of Intel and Aeron Miller saw the economic value of cubicles in that they were cheaply manufactured and easily assembled, and they saved on real estate. Or it could be that the stale, top-down corporate culture persisted despite the cubicles, not because of them. Bosses weren’t ready to relinquish their plaques, and workers weren’t ready to operate autonomously.

Now that we have turned the corner on the century, there is much talk of the twenty-first century office. The direction is again towards more open, more egalitarian, more t-shirts. Technology has changed the landscape so that Starbucks and home are viable alternatives to an office or where an office is still necessary, to bring Starbucks to it.

Cubicles are not going anywhere, but if they did, it would not be before paving the way to exactly the type of office that Robert Propst imagined.

Read more at the New Atlantis.